On my Mac, I've historically used Simon Fell's LexiLoader as an alternative to the officially supported yet windows-only Salesforce Data Loader. Though, today, I was running a deletion of a rather large set of records and it was running oh sooooo sloooooow. Now that's probably more the fault of Time Warner Cable than anyone else. (Maybe streaming Pandora at the same time didn't help.) If only there was some cloud-based alternative. 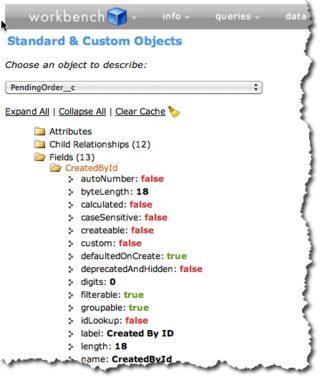 Then I remembered about Workbench. Admittedly, I have not used Workbench since its very early release and at that point I think the hosted version was not yet GA. I had even forgotten that I still had it bookmarked. Well, I logged in today and  *Facepalm* . Why have I not been using this all along?

Now I don't do data migrations very often, but I am constantly looking for details on schema and testing queries. Usually I use Eclipse, but navigating Workbench is so much faster. With the pull down menu I can hit a key and get down to my object faster. Workbench loads fields faster than Eclipse as well. I can also use command +f . I can copy and paste an id from a test query or click on the record to open it in Salesforce. These little oft-used hotkey features are noticibly lacking in the Eclipse version of the schema explorer.

Ever need to get your session id? Its right there under the Info menu.

Want a web based version of Ant? Check the Migration menu.

Go check it out for yourself.