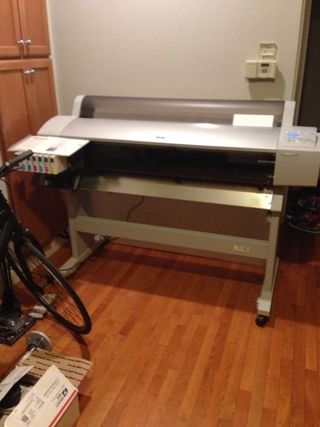 » This is part 2 of my continuing experience with an old Epson 9600 i picked up on Craigslist. Be sure to check out Part 1 and Part 3)

First, I wanted to update the firmware to the latest version.  The biggest challenge was that for the Mac, the installer was only available for Mac System 9. (I know, right?) So, being the techno-wizard I am, I dived head-first into looking at emulators to run the older Mac OS (like Sheepshaver and Basilisk II) but they couldn’t access printer drivers. Even using a DOS emulator like DosBox or a Virtual Machine like VirtualBox didn’t help. Eventually I tossed in the towel and went with the path of least resistance (or so I thought), dug up an old PC, some boot disks, and a copy of Windows XP (I know, right?) After several hours of being reminded why I made the switch to Mac, I finally was able to get XP running. I installed the printer driver, and then the Printer Service Utility v1.33 but the utility would not “see” the printer despite being able to print test pages. I uninstalled the utility, installed Status Monitor3 v3.1b to check the connection and that application worked fine. After rebooting and reinstalling, the utility finally recognized the printer and I was able to update to Firmware version BW1452_Q.UPG . 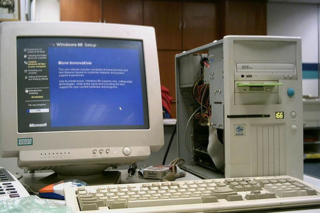 The printer came to me in fairly good shape; no clogs or any of the major issues I saw commonly cited on Luminous Landscape and in the Epson Wide Format Yahoo group. So my concern with such an old printer was more on future-proofing; guarding against some of the planned obsolescense inherent in today’s hardware.

There are only a few parts distributors listed on Epson’s Support Page for user replaceable parts. Most of these sites are god-awful, user-unfriendly garbage.

My foray into these virtual junkyards made me feel only more certain that I needed to stockpile some parts if and when I could find them. So the next stop, of course, was Ebay. I picked up an Automatic cutter (part # C12C815291) for $60, less than the $95 Epson charges.

I also bought three (at $6 each plus shipping) Head Cleaners aka Wipers (part #1230744 or #1113691 depending on where you look) from American Injet Systems because I didn’t trust the cheap knockoffs from China floating around on Ebay. Manual says they last about a year each and the status page I printed said mine was about 3/4th of the way through its useful life. 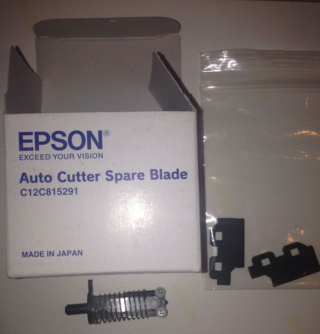 US invasion of Epson imminent

High-quality third-party ink like Ink2Image’s Cave Paint and InkJetMall’s ConeColor inks run about 50% less (a reasonable $1,150/gallon). That discount and the possibility that Epson may discontinue manufacturing cartridges for this model — as ConeColor just recently discontinued their K2 inks in favor of the K3 used by newer Epson models — led me to invest in refillable cartridges. ConeColor’s cartridges were highly recommended but, in my opinion, over-priced at $242. I ended up getting a full set of eight from InkJetCarts.us for $153. The same set were cheaper at InkPro2Day and InkOwl but InkJetCarts had a better reputation for support on some of the forums. Which turned out to be true, since one cartridge was missing a stopper and chip. I contacted them and the next day received a replacement. Be sure to check the chips on you set aren’t loose and apply a bit of glue if they are (be care not to get glue on the contacts). If any one falls off inside the bay, you might have to dismantle the whole thing to retrieve it. (Edit: I’m now on my second set which I purchased from InkOwl . Looking at another vendor on Amazon they must come from from a common supplier because they look exactly the same, only less expensive.) 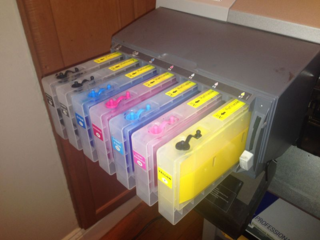 I wasn’t completely happy right off the bat. I found the cartridges wouldn’t stay in their slots like the OEM carts and constantly pop back out. Because of this, I couldn’t get the printer to recognize that all new the cartridges were installed. It ended up being a game of whack-a-mole. When I got one working, the red light on another turned on. What finally worked was turning off the chip counter that keeps track of ink levels. I had planned to do that anyway to reduce the wear and tear on the delicate gaskets and chips caused by taking the cartridges in and out.

Bump in the road

When I installed the cartridges, I hadn’t received my inks from ConeColor yet. I was too eager to play with my new toy and transferred the ink from my old OEM cartridges using a syringe. However, I was really low on Light Magenta and the amount in the cartridge wasn’t enough to keep air from getting into the line when I first ran the Int Fill procedure. My heart dropped when I saw bubbles in the line. I had to deal with the same issue for hours once with my 2200 and now I had the same problem on a printer 5 times as big and complex. Nearly all suggestions I read talked about taking out the dampers or running cleaner through the lines; actions that require lots of dismantling, replacing, and praying. My heart dropped with every word.

Air bubbles than can potentially kill your print head.

One forum suggested just running the Int Fill procedure again. This seemed the least invasive course of action. So when my ink arrived, I filled up the carts, primed each one again (just to make sure), and ran int fill. I watched it run, thinking there’s no way it’ll be this easy. Once it finished, however, a quick inspection showed the line was clear of bubbles. Nice! The printer gods must be smiling upon me. Next step was to print a nozzle check. “Error: Maintenance Tank Full”. Curse you, printer gods!

The maintenance tank gets filled up quickly with all the ink the printer wastes constantly cleaning the print head. So, you always needs a spare. Epson charges $40 for this plastic container filled with absorbent material. Luckily, the chip resetter that came with my ink cartridges (more on those) also also worked on the tank. So my plan was just to crack open the tank, replace the material, reset the counter, and feel better about not adding needless waste to our landfills. Edit

When I took out the tank, I could feel that it weighed about 5 pounds (in other words, a few hundred dollars worth of ink). Mind you, I had just installed this new tank less than a month ago. When you crack it open to get the used material out, you’re going to want to do this over the sink because a good amount of the ink will pour out. I rinsed out the whole thing being carefull not to get the chip on the side wet. (I was also able to rinse out the material — which comes in pre-cut slices — and save it for future reuse.) Then I stuffed the dried tank full with 2 packs of 2×2 Cotton Squares that I had bought for $5. Incidentally, I did look at using diapers but, damn!, they are expensive for something that just gets sh*t on. Paper towels are not a good choice since tend to disintegrate as they get wet. Cotton holds together better and, when placed on their side, I was able to pack the squares in much tighter than cotton balls. I used the chip resetter, popped the tank back in, and everything was good to go at 1/10th the cost. 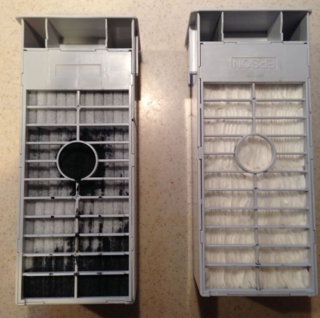 Next Steps or The Long March to Diminishing Returns

Since I’m not using official Epson inks anymore and I’ve heard about the 9600 exhibiting color drift over time, I’m planning to color calibrate the printer. My recent effort with my Spyder 2 helped calibrate my display so, I know what I see on the screen is what’s getting sent to the printer’s driver. However, without measuring the final output, I still haven’t closed the color management loop. For that I’ll need a Spectrophotometer. Back to Ebay, I guess.